Northern Pygmy-Owls in the Hood 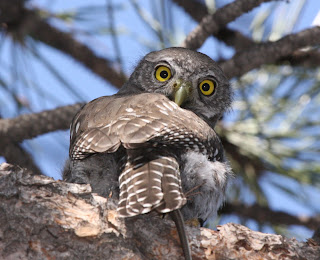 On August 4th, we got a call from our neighbors, Pete and Val, about the little owl being back.  She’d seen it previously, searched the Internet, and decided it was a Northern Pygmy-Owl.  We immediately headed over to indeed find a Northern Pygmy-Owl in the top of a cottonwood tree in broad daylight. Meanwhile, we heard high-pitched trills emanating down the ponderosa covered hillside, so we worked our way up a bit to investigate.  The Chipping Sparrow-like trills were coming from young Northern Pygmy-Owls.  Completely unconcerned about us, the owls were curiously bobbing their heads back and forth, and trilling every minute or so.  One sported a Pygmy Nuthatch in its talons while another had a lizard.  At least four of these small mountain owls hung around in close proximity to our neighbors’ back door treating us to a spectacular show. 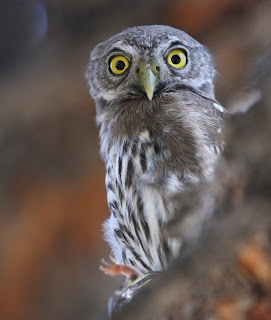 Note the lizard in this photo. 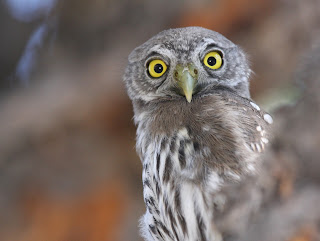 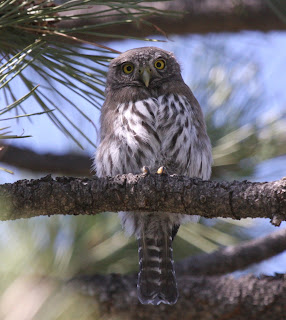 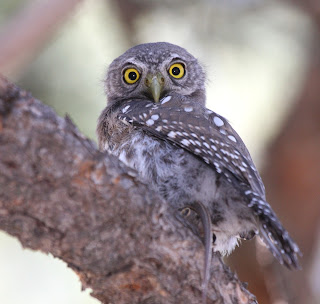 All the above photos by Joel Such

Press on the arrow to hear one of the fledglings vocalize.

Yesterday, while we were out, Val called again.  She reported that they’d seen one of the owls using their birdbath. 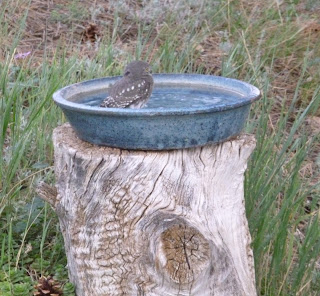 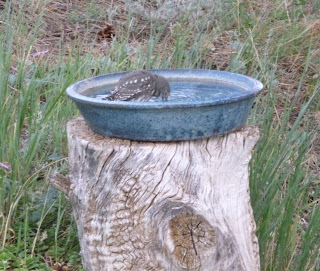 Thanks to the Petersons for giving us updates and allowing us to observe these birds!

-----
If you haven't previously seen it, you may want to check out our December 2009 post featuring a Northern Pygmy-Owl taking out a Harris's Sparrow!
Posted by Joel Such at 8:33 PM