The glacially carved landscape of Yosemite National Park is a place of extreme beauty.  Bold granite domes, lush meadows, tall waterfalls, and giant sequoias grace this designated World Heritage Site.  Drawing crowds from all over the world, over 3.7 million people visit the park each year and most of those folks crowd into the 7 square miles of Yosemite Valley threatening to love the place to death.  95% of the park is designated as wilderness and with elevations ranging from 2,127 to 13,114 feet and containing five major vegetation zones, there is plenty to explore.

On the evening of June 23, we took our first foray into Yosemite.  Still needing to get in our run for the day, we ran on the trails around Tuolumne Meadows while our parents hiked around Lembert Dome and Soda Springs.  Being a couple thousand feet higher than any other place on the trip yet (8600’), we saw a good number of new species including Spotted Sandpiper, Mountain Bluebird, Pine Grosbeak, and Cassin’s Finch.  As the light began to fade, we slowly made our way back down to Lee Vining near Mono Lake, stopping here and there hoping to hear some owls, but only had a distant calling Common Poorwill! 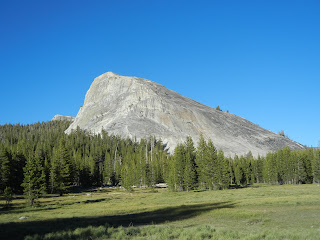 Anticipating the Sunday crowd in Yosemite Valley, we departed at 4:45 AM and worked our way over Tioga Pass to the west side of the park.  Our plan was definitely a good one, as we saw very few vehicles on the road and had every scenic pull off to ourselves.  By the time we actually entered Yosemite Valley, the traffic was starting to pick up and by 9 am the place was swarming with tourists.  We had smartly nabbed a parking spot and walked or took the free shuttle to our destinations of choice. 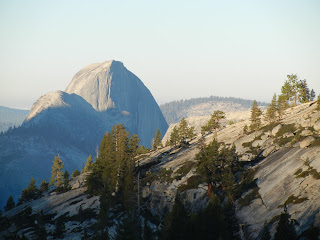 First glimpse of Half Dome (Olmstead Point).
By Renée Haip 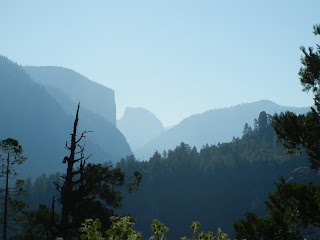 Another View of Half Dome.
By Renée Haip 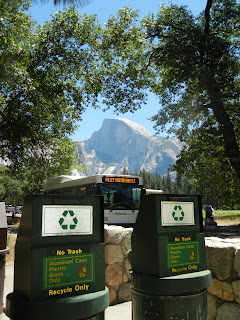 Another view of Half Dome, depicting the reality of Yosemite Valley!
By Renée Haip

For our time in the valley, we went on a few short hikes.  First, we worked our way from the parking area to the base of Yosemite Falls.  Plummeting off a 2,325-foot cliff, Yosemite Falls is the highest waterfall in North America.  Vaux’s and White-throated Swifts swirled around above the old growth oak and pine forests where we saw birds such as Acorn, Hairy, and White-headed Woodpeckers, Cassin’s Vireos, Hermit Thrushes, Golden-crowned Kinglets, Chestnut-backed Chickadees, Canyon Wrens, Nashville and Hermit Warblers, Western Tanagers, and Black-headed Grosbeaks.  In a small rocky brook downstream from the Lower Yosemite Fall, we saw our first American Dipper of the trip. 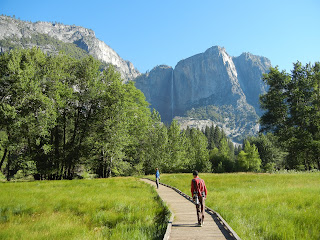 Hiking through the meadows of Yosemite Valley - by Renée Haip 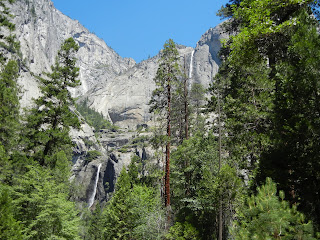 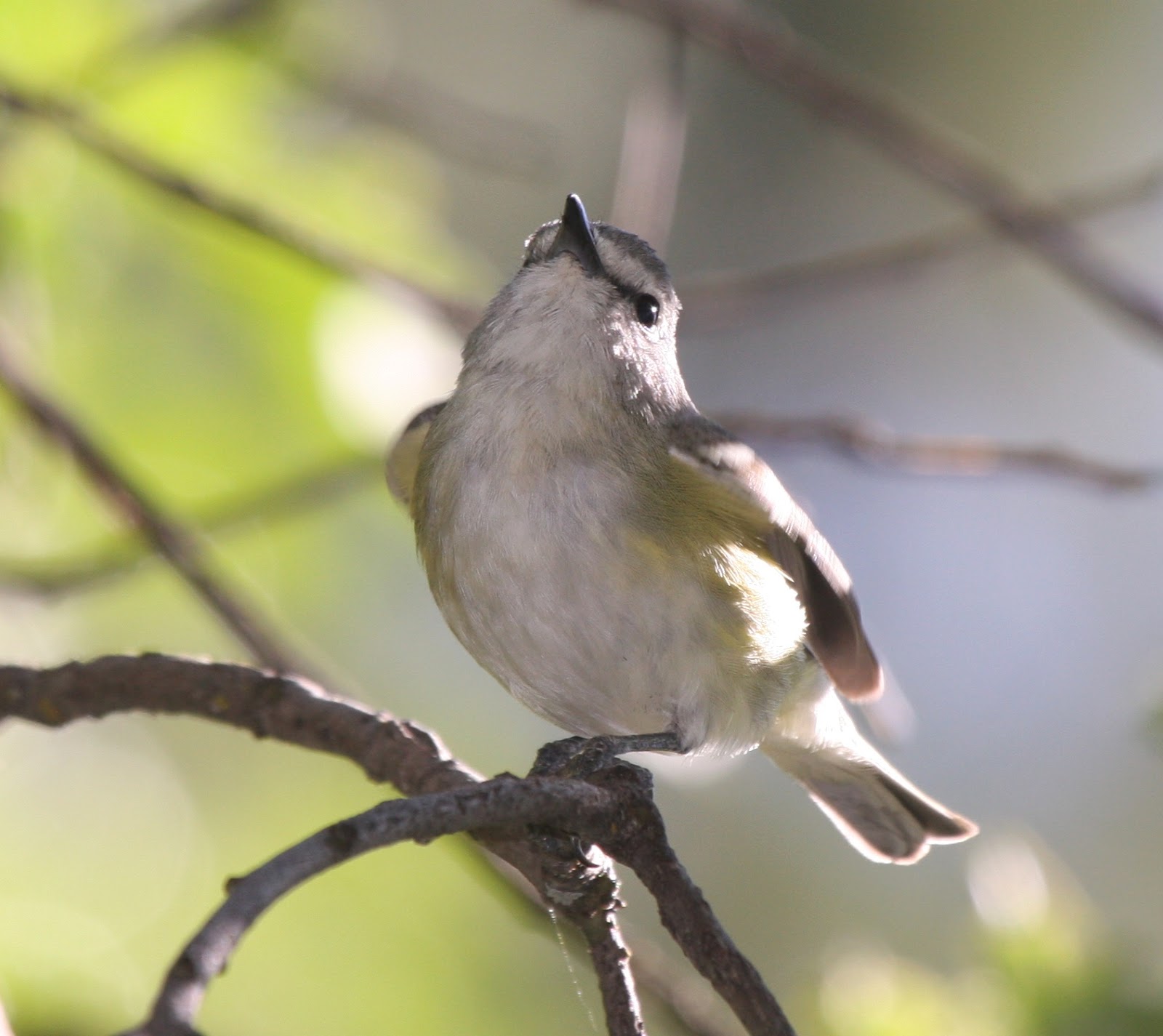 Cassin's Vireo - by Joel Such 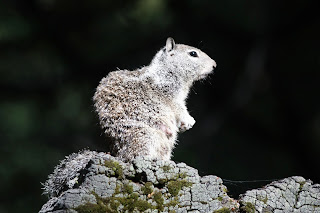 California Ground-Squirrel - by Marcel Such 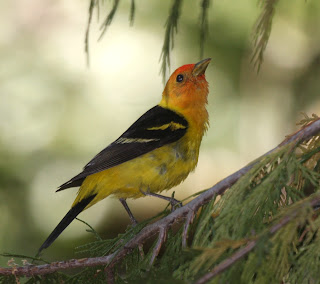 Western Tanager - by Joel Such 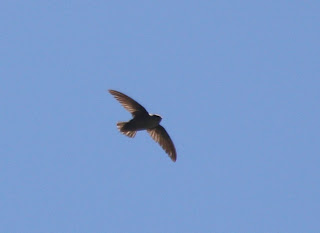 Vaux's Swift - by Joel Such

Next, we took the shuttle to the trailhead for Mirror Lake.  During this time of year, the lake vanishes, but Tenaya Creek is flowing.  This nice little hike provided Mallards, a Western Wood-Pewee, a Cassin's Vireo, Chestnut-backed Chickadees, Brown Creepers, Golden-crowned Kinglets, Yellow Warblers, Song Sparrows, a Black-headed Grosbeak, and a Bullock's Oriole.  A small marshy area held dragonflies such as Four-spotted Skimmers, Twelve-spotted Skimmers, and Common Whitetails. 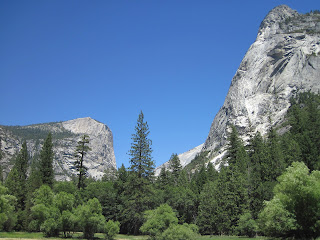 Hike to Mirror Lake - by David Such 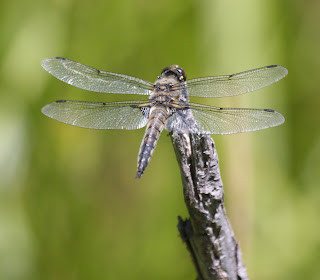 Four-spotted Skimmer - by Joel Such 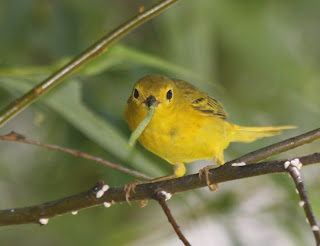 Yellow Warbler - by Joel Such 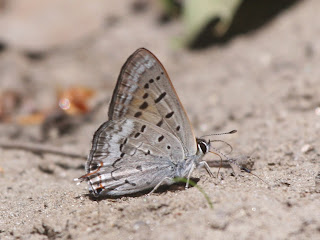 Tailed Copper - by Joel Such

By mid-afternoon, we joined the masses and headed out toward Glacier Point to enjoy the views, which did not disappoint.  In the evening, we hiked to McGurk Meadow hoping to at least hear, if not actually see a Great Gray Owl.  Hiking three-quarters of a mile through upper montane forest, we arrived at a lush meadow overrun with blood-sucking mosquitoes.  In the fading light, we started to hear the drumming of at least three Black-backed Woodpeckers.  Eventually we found one of the elusive Black-backed Woodpeckers in the top of a tall dead snag!  A Calliope Hummingbird, calling Red-breasted Nuthatches, a Dark-eyed Junco on a nest, and singing Lincoln’s Sparrows were also present along with a Long-tailed Weasel scurrying across the trail.  Waiting patiently for any hint of a Great Gray Owl, we heard the screech of a young bird!  Following the sound, we heard it a few more times along with a band of scolding Steller’s Jays and Mountain Chickadees.  We sat on the edge of the meadow hoping to get a bit luckier, but sadly we never saw the owl.  However, in the dim light, we enjoyed a spectacular aerial show of leaping brook trout snatching mosquitoes over the small pools of water in the meadow. 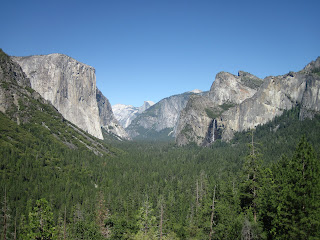 The iconic Tunnel View overlook - by David Such 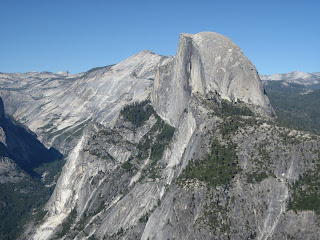 Half Dome from Glacier View - by David Such 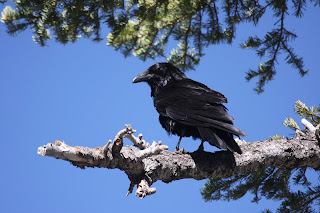 Common Raven - by Joel Such 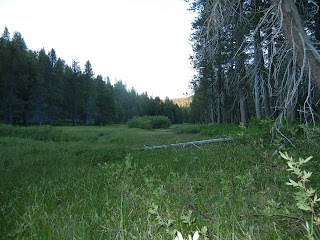 McGurk Meadow - by David Such 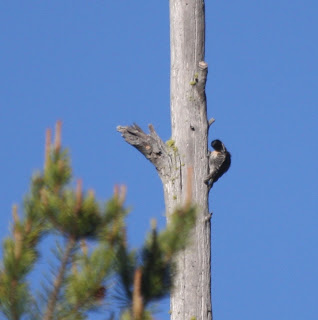 Black-backed Woodpecker - by Joel Such 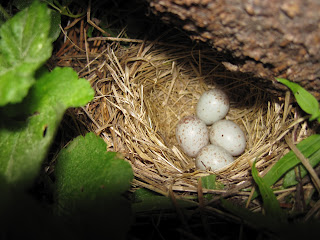 Oregon Junco Nest - by Joel Such 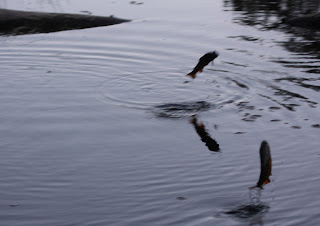 Brook Trout - by Joel Such


On our way to lodging in Oakhurst, we stopped at the Mariposa Grove and studied the Giant Sequoias in the moonlight!  The next morning, after sleeping in for a change, we headed back into Yosemite to see the fabled Mariposa Grove in the daylight.  Arriving at 10 am, the parking lot was packed and we had to drive farther down the road to Wawona to catch a shuttle bus with every seat and every inch of the aisle crammed tightly with passengers.   On our way to the oldest tree in the grove, the “Grizzly Giant,” a fifteen-inch sugar pine cone (aka widow maker) plummeted from the sky missing us by a couple feet.  I jumped back in response and took a big fall landing atop a sharp-edged rock and spent the rest of my time limping back to the parking lot.  Marcel continued on through a less traveled section of the grove and added a lot more species to the Mariposa Grove list including Red-breasted Sapsucker, Hairy and White-headed Woodpecker, a Townsend’s Solitaire feeding a fledgling, and Pacific Wren. 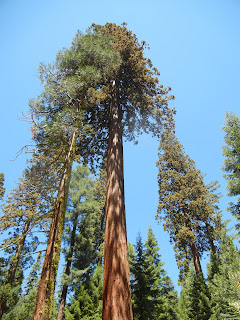 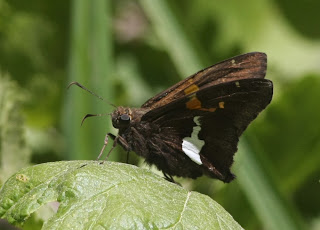 Silver-spotted Skipper - by Marcel Such

Up next: Kings Canyon and Giant Sequoia National Parks
Posted by Joel Such at 9:40 PM