I glanced out the front door at our feeder trees and found myself being stared at by the false eye spots of a Northern Pygmy-Owl. The owl noticed me and took flight towards the creek, lugging with it some very large cargo. My mom got a glimpse of it flying away, while Joel had missed it entirely. Joel quickly slipped his bare feet into our dad’s Crocs, donned a light fleece jacket, grabbed his binoculars and quickly exited out into the miserable 5° F. snowy weather. I, on the other hand, put on cold weather gear and went for the camera equipment only to realize that the long lens was in the car that my dad had driven to work! Joel came back in for warmer clothes (his idea for “warmer” is sneakers in 10 inches of snow, still no gloves) and we both went out, Joel armed with a short lens attached to the 40D and myself carrying a point and shoot with video capability. Immediately, Joel and I spotted the small owl sitting in a ponderosa pine with its quarry. It flew off into another, low-lying deciduous shrub and began to rip apart its prey. Joel and I crept to within about 15 feet of it and were finally able to identify the victim, the Harris’s Sparrow! 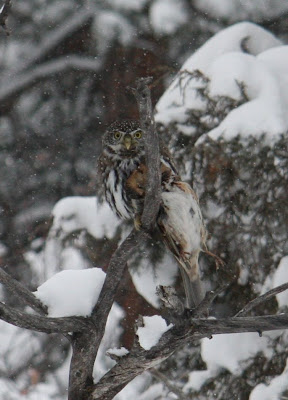 Northern Pygmy Owl with its prey, a Harris's Sparrow
by Joel Such 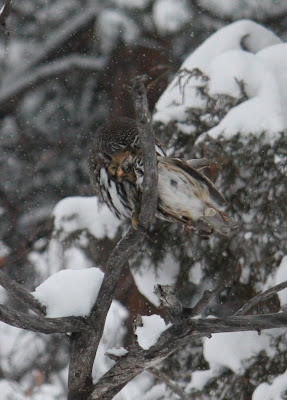 Northern Pygmy-Owl with its prey, a Harris's Sparrow
by Joel Such 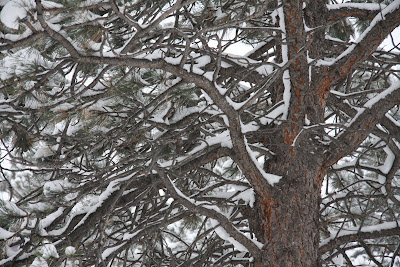 Can you find the Northern Pygmy-Owl?
Click on image for a closer look.

Northern Pygmy-Owl with Prey
Footage by Marcel Such
Posted by The Such Boys at 4:12 PM

That is fantastic. Too bad it had to happen to such a great bird, but that's the breaks. I doubt the owl cares.

Great photos. That Harris Sparrow should fill the little owl's belly quite well.

You guys do such a fantastic job!

Thanks for sharing! I've never seen such a little owl, and that's some cargo its got a hold of... Neat, though I'm with the others and wish it had bagged a house sparrow.

Great images and video! I guess those little owls have to survive, too.

Fantastic job! I'm still not sure I can find the owl in the Ponderosa. Where is it?

You two have an excellent website. We followed your Harris's Sparrow/Pygmy-Owl saga with fascination.

Thanks for Posting your drama.

Heck, what a way to go. First being an instant celebrity, and them getting eaten by a totally cool looking owl!

I have plenty of Harris's Sparrows over here in Iowa to send your way just give me one of those Northern Pygmy Owls! Very neat post.

Thanks for your comments everyone!

Gary, you can now click on the tree image and it'll get bigger. The owl is in the central part of the picture.