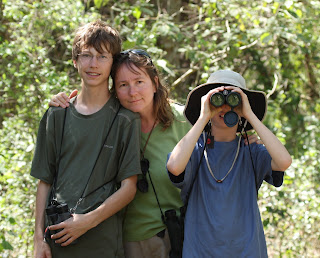 This morning we essentially get a private tour of Estero Llano Grande State Park by Jonathon, a volunteer.  We learn all about the history of this place.  Just a few short years ago this land was converted from cotton and cornfields to very productive wildlife habitat.  Shallow ponds were dug into the earth and the land was vegetated with native plants.  It is a highly managed landscape with irrigation water filling these man-made water features and much effort spent trying to keep exotic plants in control.  There is a butterfly garden where we saw Mexican Bluewing, Giant Swallowtail, Soldier Monarch, Mexican Spotted, and Pipe-vine Swallowtail butterflies.  We also saw this really cool beetle, an iridescent tortoise beetle. 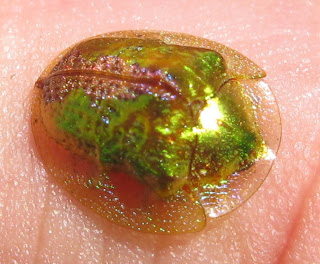 Tortoise Beetle
There is only one natural pond here (Alligator Pond), which is quite deep and harbors large alligators.  There is also a water filled resaca, which is an old oxbow (river channel) of the Rio Grande.  Between these natural features and the created habitat, the park has drawn in a lot of great wildlife.  Jonathon takes us through an old trailer park, which is being disassembled and is a restricted area, as there are lots of open cisterns and other hazards.  Currently this area has some great rarities … a Black-throated Magpie Jay (probably an escapee from captivity), Blue Bunting, and a Rose-throated Becard. We didn’t end up seeing any of those birds by the time our tour was up, and so we decided to go have lunch and do an afternoon birdwalk.  Because our group had been so small, Jonathon was able to show us an Eastern Screech Owl peering out of a nest box! 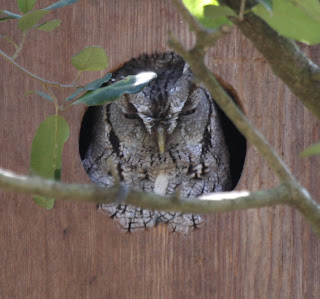 Eastern Screech-Owl
The afternoon birdwalk was led by a 4 year, very committed volunteer named Huck.  Again, we missed seeing the rarities, but saw a lot of other great birds.  After the tour was over, Huck continued on and took us out to see Common Pauraque by Alligator Lake where we also saw Green Kingfishers and Anhinga.  The Common Pauraque was just a few feet off the trail in its reliable roosting spot on the ground.  It camoflagues so well, that you’d unlikely find it on your own!  Huck said that if we wanted to come back in the morning, he’d lead an 8:30 AM walk through the trailer park to try again for the rarities. 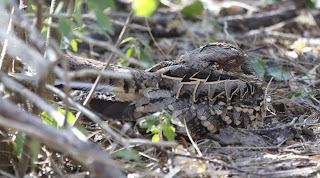 Common Paraque catching zzzz's
Estero Llano Grande State Park really made us realize that we can do more to improve the habitat around our home.
Posted by The Such Boys at 7:48 PM