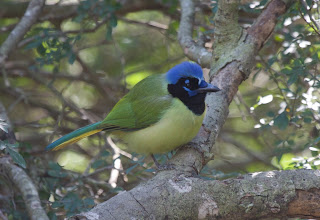 Green Jay - by Marcel Such
We are about as far south as you can be in Texas.  Here we begin to see some birds that reach their northern most range in Texas and are endemic to this area.  Sabal Palm Audubon Center sits at the southern tip of Texas near the mouth of the Rio Grande.  This is where we started our day. On our “most-wanted” list, Green Jay and Plain Chachalaca ranked highest with Black-crested Titmouse, Great Kiskadee, and Olive Sparrow not far behind.  At Sabal Palm, we saw these long awaited species plus some others.  Within the first five minutes of being there, we had seen Green Jays, Plain Chachalacas, Black-crested Titmice, White-tipped Doves, and an Audubon’s Oriole.  On the Resaca Loop Trail, we found a Great Kiskadee and two Olive Sparrows.  Off Vireo Lane, we saw one Blue-headed Vireo and some very nice warblers – Yellow-rumped, Black-throated Green, Yellow-throated, and Orange-crowned.  In the Butterfly Garden, we found a Dusky-capped Flycatcher, generally found only in southeastern Arizona and extreme southwestern New Mexico.  This bird has been frequenting Sabal Palm for a couple of months.  Along the Rio Grande, we saw our first Buff-bellied Hummingbird, which was visiting a flowering bush. 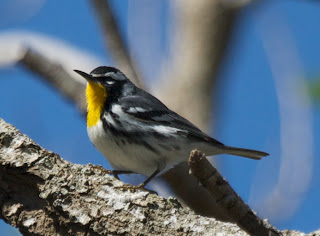 Yellow-throated Warbler - by Marcel Such 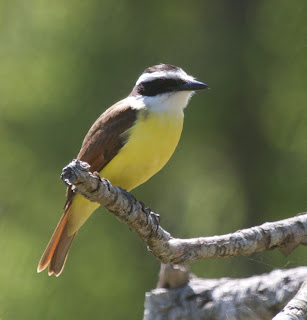 Great Kiskadee - by Joel Such 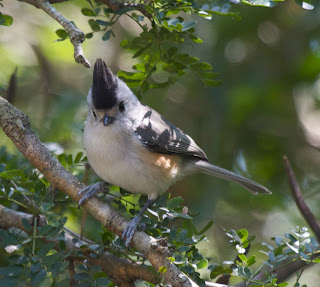 Black-crested Titmouse - by Joel Such 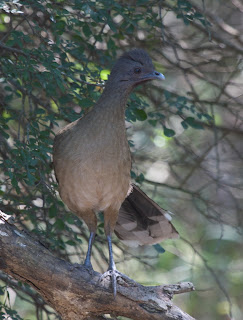 Plain Chachalaca - by Marcel Such 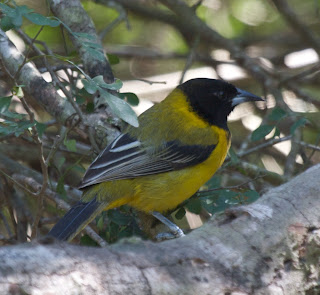 Audubon's Oriole - by Marcel Such 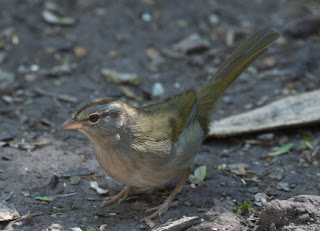 Olive Sparrow - by Marcel Such 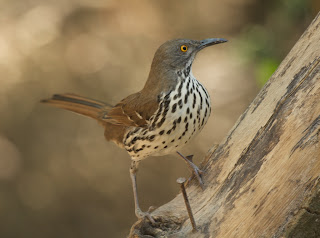 Long-billed Thrasher - by Joel Such
At mid-day, we spent an hour exploring the Laguna Madre Nature Trail on South Padre Island. Joel got a quick glimpse of a Clapper Rail, while most of us only heard it.  We especially enjoyed watching Black Skimmers, two Marbled Godwits, and a Caspian Terns on the shore and on the wing.
We finished our day at Laguna Atascosa National Wildlife Reserve.  The trails around the visitor’s center were notably busy with birds.  Along with numerous Green Jays, Long-billed Thrashers, Red-winged Blackbirds, Plain Chachalacas, and Great-tailed Grackles was an immature male Rose-breasted Grosbeak and some harder to spot warblers flitting about.  We found both Tropical and Northern Parulas, a Wilson’s, four Orange-crowned, and the usual plentiful Yellow-rumped Warblers. 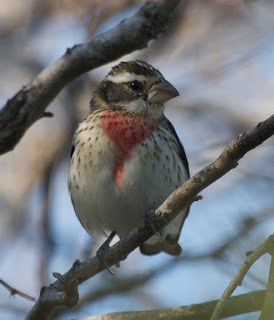 Rose-breasted Grosbeak - by Marcel Such
During the last magical hour of light, we drove the sanctuary loop.  We saw no Ocelots, but were treated to lots of shorebirds and ducks, some Couch’s Kingbirds, and a gorgeous Crested Caracara perched on a tall Yucca-type tree. 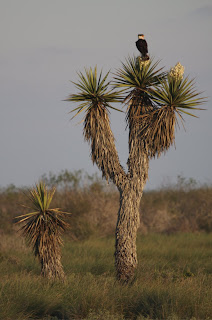 Crested Caracara - by Joel Such
Posted by The Such Boys at 8:49 PM