It's 8 PM on December the 20th, and we're pulling up to the Sochi-Floyd house in Lafayette, Colorado.  Unrolling sleeping bags on their living room floor, we make last minute plans with Birding magazine editor Ted Floyd for our 4:30 AM departure for Colorado Springs and the Fountain Creek CBC.  For the past two years of doing this count with Ted, we have left around 3 AM in order to arrive in time to try for Western Screech-Owl.  With the 100% precedent of only seeing Great Horned Owls on these pitch dark outings, Ted decided to grant us all a couple of hours more sleep.

At 6:30 AM, we stepped out of the car in the parking lot of the Fountain Creek Regional Park's nature center, the sun still a good half-hour from breaking the horizon.  Accompanying a deep hoot, a large, broad-winged bird swooped up the river corridor to land in a nearby cottonwood.  "Leaving two hours late didn't cost us Great Horned Owl," I thought ruefully.  As the four of us (we picked up Allan Burns of the Springs en route) descended into the riparian corridor of Fountain Creek, the high-pitched, bell-like flight calls of American Tree Sparrows emanated from the surrounding brush along with the notes of Dark-eyed Juncos and White-crowned Sparrows.  The first of many, the husky chuck of a Song Sparrow came from the cattails lining one of the many ponds in the area.


All Photos By Joel Such 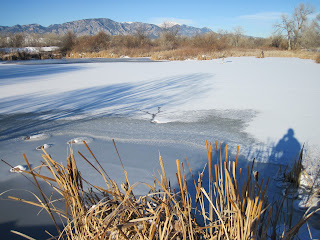 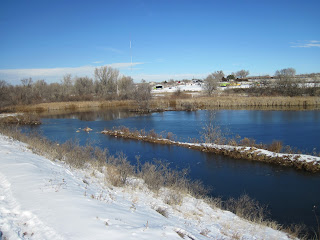 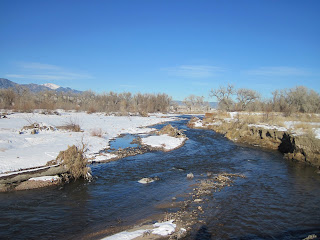 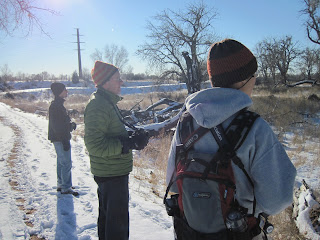 Throughout the course of the morning, we repeatedly traversed the two miles of river corridor assigned to us.  We puzzled over the many "White-cheeked" Geese in the area, weighing our opinions on the differences between the nearly identical "Lesser" Canada Goose and the Cackling Goose against each other.  The two Ross's Geese we found mixed in with the flocks of "Canadian Honkers" was a first for the count.  The Virginia Rail, Marsh Wren, and Swamp Sparrows we found in the cattails are species that are localized to this area during the winter. 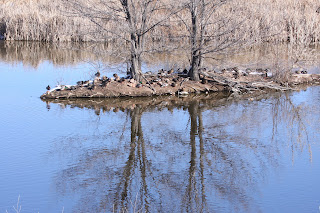 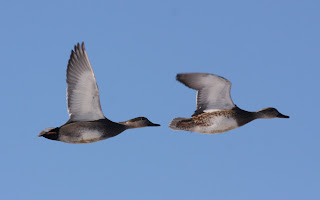 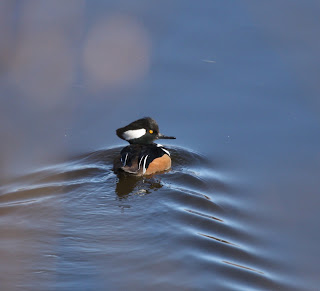 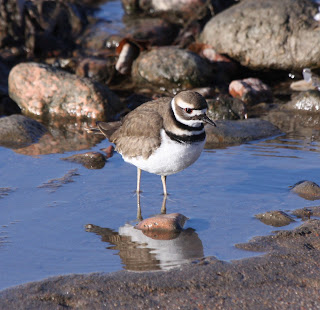 As the time for the midday compilation neared and we were forced to return to the nature center, I quickly counted up our list for the day.  I listed 48 species.  "We can't go back until we have fifty!" said Ted, half jokingly.  Unfortunately, there was really only one more potentially easy species, House Sparrows at the nature center feeders.  Sure enough, we found two of them feeding on the ground at the nature center.  Resigning ourselves to 49 species (we were already 15 minutes late), we pulled out our lunches and entered the nature center where the compilation was being held.  Halfway through the reading of the list by compiler Dan Maynard, Allan started pointing out the window and saying "Ted!  Ted, look!  Look up there!"  Sure enough, a male Harris's Sparrow was feeding under the feeders right outside the window.  50.  And then, at the end of the compilation, somebody else started pointing out the window and saying, "That's a weird looking White-crowned Sparrow."  With many people now gawking through the window, it turned out that it was actually a White-throated Sparrow, yet a new species for the day, and our final. 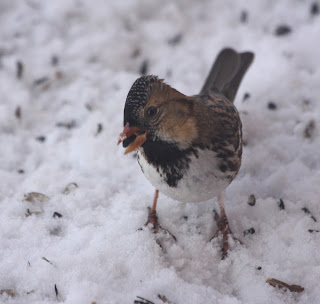