A Great Horned Owl hooted in the distance.  A few minutes before we had heard a Canada Goose, our first bird of the new year, 2012.  It was 6 in the morning, first light still an hour or so off.  Along with me were Ted Floyd and Joel (a common group as of late).  We walked down the gravel path towards a grove of cottonwood trees at Pella Crossings in Hygiene, Colorado, where we hoped for Eastern Screech-Owl.  Another Great Horned joined the first, and soon we were able to distinguish four owls calling out somewhere in the dark - two males and two females.  Though rather difficult to sex a single bird by call alone, being able to hear them together makes the lower-pitched call of the male easily identifiable.

Now entering the grove, Ted starts whistling an exact imitation of the tremulous, haunting call of the screech-owl.  For several tense minutes, nothing happened.  Then, emanating from a stand of trees on the far side of a meadow, we heard the real thing.  For half a minute, Ted and the owl "sang" with each other.  Then the owl fell silent, as did the imitator.  A new Boulder County species.  Walking as quietly as one can on two inches of old, crusty snow and dry grass, we made our way across the field.  Trying again to coax the little owl into calling again, we stood still and waited as Ted again tried to work his magic.  But to no avail, the woods stood silent. 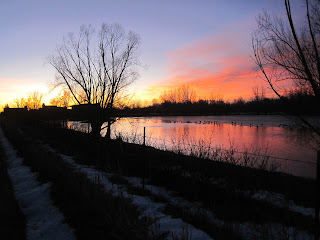 photo by Joel Such

With the sun now breaching the horizon, other birds started awakening.  A flock of starlings whirred overhead - they would cause us trouble later by uttering perfect imitations of both Killdeer and Blue Jay.  Red-winged Blackbirds called from a nearby cattail marsh as Brown Creepers and a Downy Woodpecker worked the overarching cottonwood branches above our heads.  Though surrounded by ponds, we had to search for open, un-iced water.  We found this in the form of two private ponds bordering the public land.  Ducks and geese clogged these refuges in an otherwise frozen world.  Despite our probing searches of these flocks, we neglected to turn up anything beyond the normal species: Canada Geese, American Wigeons, Redheads, Ring-necked Ducks, Common Goldeneyes, Common Mergansers, and American Coots.

Returning to the car, we also encountered a flock of wintering passerines near the trailhead.  Searching through the flock, we found it contained numerous Song Sparrows, gambelii White-crowned Sparrows, Dark-eyed Juncos (of the Slate-colored, Oregon, and Pink-sided flavors), plus an incredible three Harris's Sparrows (a new county bird for me and Joel) and two "Myrtle" Yellow-rumped Warblers. 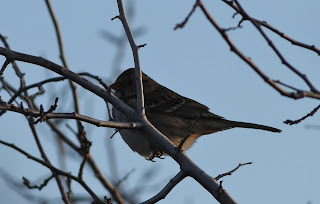 Continuing on up into the mountains, we encountered a herd of completely unconcerned Bighorn Sheep licking salt off of Highway 7 just up canyon from Lyons.  In Allenspark at the famous Fawnbrook Inn, we watched the feeders there and listened for an incoming flock of rosy-finches.  Unfortunately, we never heard the raucous chatter that accompanies a massive flock of these mountain finches.  However, we still saw two rosy-finches, a normal interior west Gray-crowned Rosy-Finch and coastal "Hepburn's" Gray-crowned Rosy-Finch, along with a flock of Evening Grosbeaks.  At the Olive Ridge Campground near the Wild Basin trailhead in Rocky Mountain National Park, we saw a beautiful adult male Pine Grosbeak. 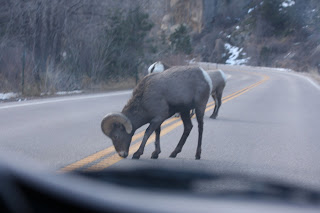 Bighorn Sheep - photo by Joel Such 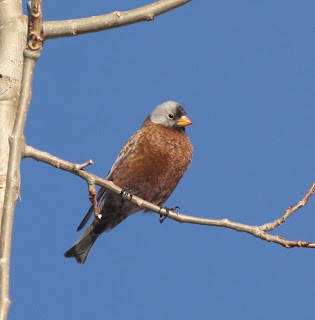 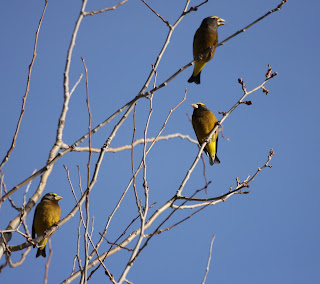 Evening Grosbeaks - photo by Joel Such 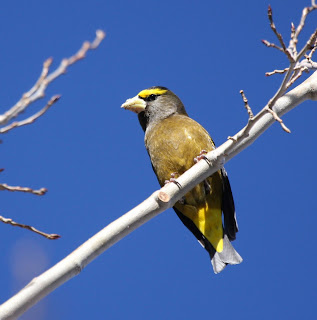 Evening Grosbeak - photo by Joel Such 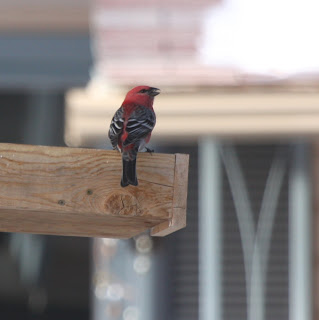 Pine Grosbeak - photo by Joel Such 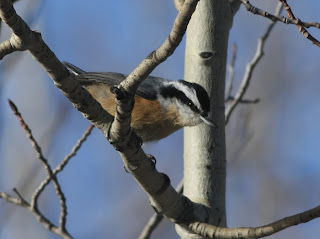 Red-breasted Nuthatch - photo by Marcel Such

Returning back to the foothills level, we stopped by our neighbor Davis's house.  The purpose of this: Ted hadn't seen Pinyon Jays in Boulder County since he started eBirding in 2007.  Davis resides in Larimer County, a mere stone's throw from the county line.  Reclining on deck chairs overlooking his feeders, Davis sets out a handful of peanuts in an attempt to draw these Pinyon Pine specialists out of the depths of the adjacent Sisk conservation property.  For a half-hour, we waited in suspense, for their gaudy calls to reveal their presence.  With time constraints on Ted's part, we were forced to retreat to the car.  Before that, however, we made a quick trip up to the top of the boulder pile just east of the Davis house.  There, we caught the distant calls of a flock of Pinyon Jays.  Staying just long enough to confirm that at least some of the birds were calling from the Boulder County side of the fence, Ted returned us to our house by noon.  It was a productive morning of birding with 45 species seen on the first day of 2012.
Posted by Marcel Such at 6:32 PM

Great account of an outstanding day, Marcel! Wonderful photos, too.

Nick, that is what I thought as well, but according to Ted Floyd and numerous web searches, that is not the case.