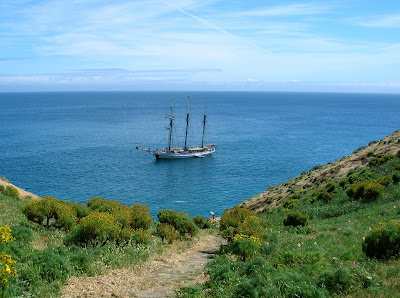 Tole Mour Anchored off Santa Barbara Island
by Joel Such

Marcel and I (Joel) embarked on a five-day sailing trip off the coast of California. Our neighbor, Clark (a.k.a Patch), organized this trip for Lyons area teens. We flew to LA on March 28th with a total of 29 kids and 6 chaperones with one being our dad.

Upon arrival, we beheld a 156-foot long, 340-ton, three masted tall ship moored at the Long Beach Harbor . . . the Tole Mour . . . the ship we were going to learn to sail. We spent our initial day on land exploring Long Beach where I got in as much birding time as possible. The next day we would be loading onto the ship where we would have few if any opportunities for dedicated birding. I was pleased to find a few Black Oystercatchers, Willets, Marbled Godwits, Heermann’s Gulls, etc. 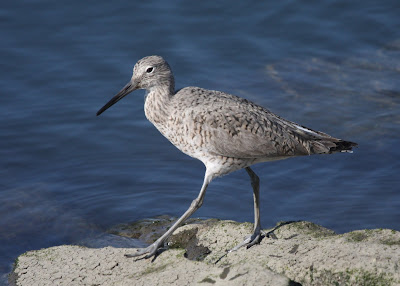 Willet - by Joel Such 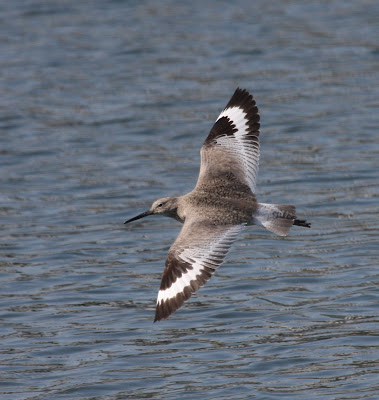 Willet in Flight - by Joel Such 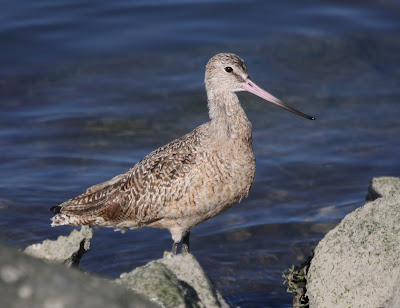 Marbled Godwit - by Joel Such 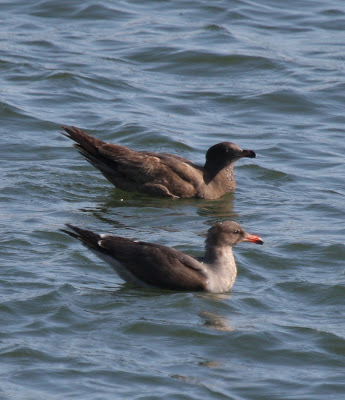 Heermann's Gulls - by Joel Such 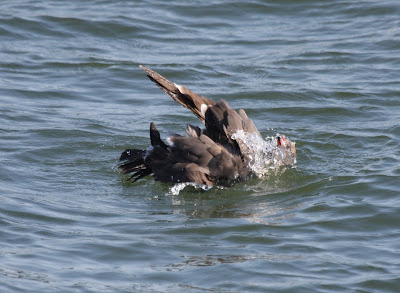 Heermann's Gull Bathing - by Joel Such
We spent our first evening at the Long Beach Aquarium getting a behind-the-scenes tour and performing some experiments. When we turned in for the night, we all found a spot on the floor next to the big tanks where large fish swam by our heads through the night. The next morning we boarded the Tole Mour! As we headed out of the harbor, we saw Surf Scoters and our first Sea Lions of the trip, our group’s namesake. 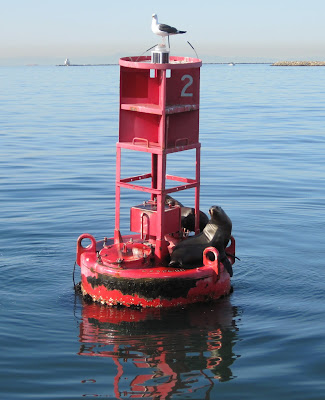 Sea Lions and a Western Gull - by David Such

When we got out of the harbor, it was time to set sail! They first showed us how it was done and we only did a little of the work. As the wind blew us farther out to sea we saw our first whale of the trip . . . and my first ever whale. It was a Fin Whale followed shortly after by a second Fin Whale. These are massive creatures, the second largest living animal after the Blue Whale! Both Fin and Blue Whales are baleen whales, which means they do not have teeth, but rather baleen plates for filtering food from the water. 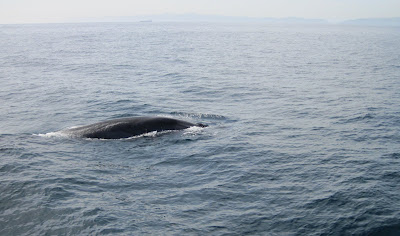 Fin Whale Surfacing near the Tole Mour - by David Such 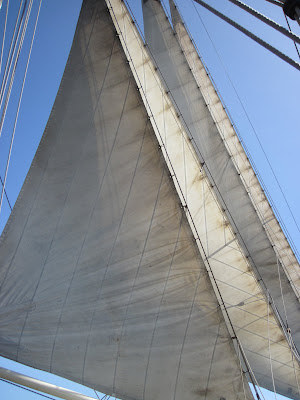 Headsails - by David Such

After sailing most of the day, we anchored off the coast of Santa Barbara Island. We climbed to the crow's nest and got a bird's eye view of the deck below and a spectacular view of the island. 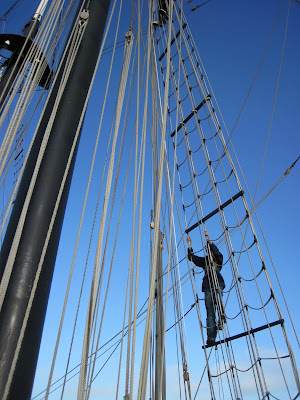 Joel Climbing to the Crow's Nest - by David Such 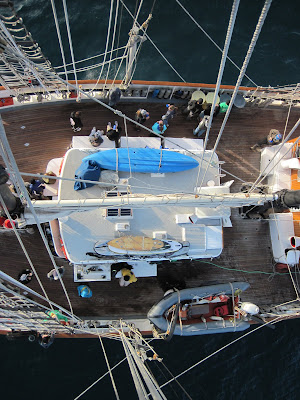 Bird's Eye View of the Deck - by David Such

We started the next morning (and every morning of the trip) with an optional polar bear jump into the ocean followed by a warm, tasty breakfast. Our morning activity was snorkeling off the island's shore where we swam with sea lions. It felt very odd being encircled by gazillions of these curious creatures. We saw very few fish and were told that there are so many sea lions around the island that the fish population is low. 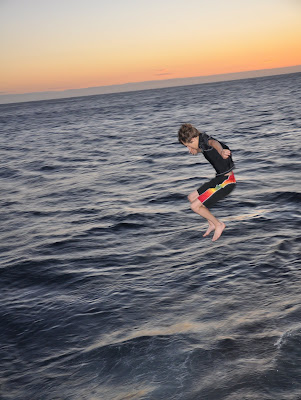 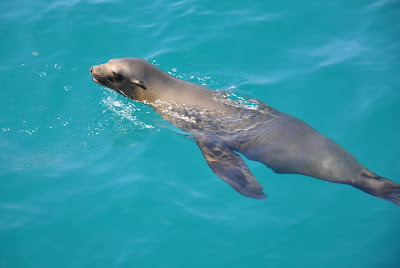 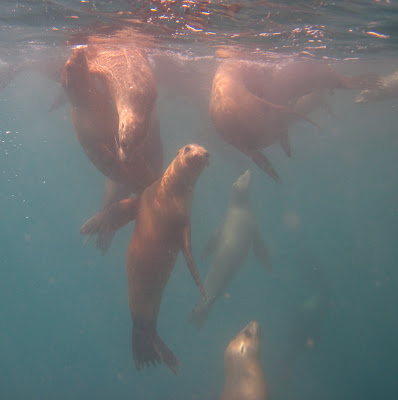 Surrounded by Sea Lions - by David Such

After our morning of snorkeling, we took a small raft (the Landlord) to Santa Barbara Island. The winding trail up to the closed visitor center had yellow-blossomed Giant Coreopsis growing along the trail. We continued on, hiking to the other side of the island. Some of the birds I saw were Yellow-rumped and Orange-crowned Warblers, Western Meadowlarks, Horned Larks, Western Gulls, and Brown Pelicans. 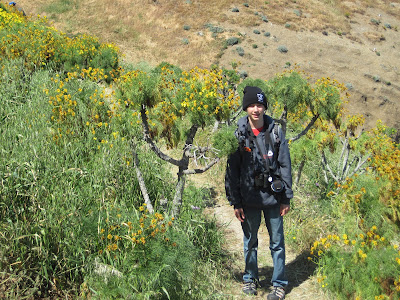 Joel Walking Through Giant Coreopsis - by David Such 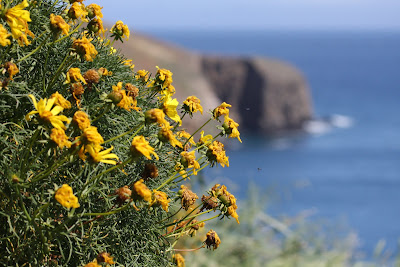 Blooms of the Giant Coreopsis - by David Such 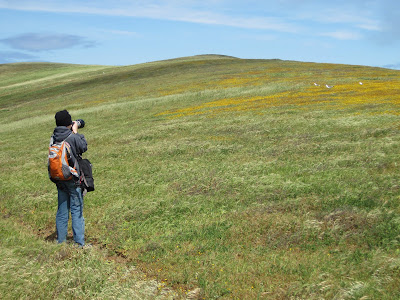 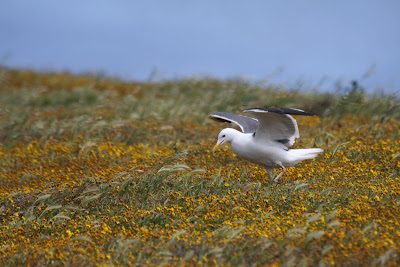 Western Gull on Santa Barbara Island - by Joel Such 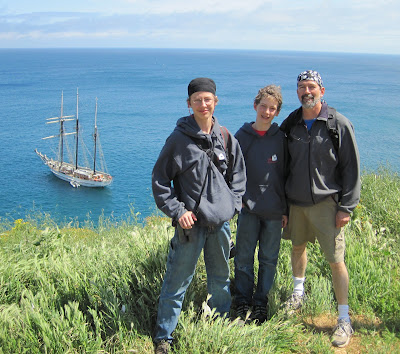 The Such Crew on Santa Barbara Island

After the visit on Santa Barbara Island, we got ready to set sail for Catalina Island. I had my hands full setting the Mainsail as I saw a petrel flying low over the ocean . . . too far to identify by naked eye, and if I dropped the line to get my binoculars . . . I would be in big trouble. The petrel species will forever be a mystery to me! As we got to the island, we started tacking and jibing and saw Common Dolphin, scientific name - Delphinus delphis.

We anchored in Isthmus Harbor and while I hung from the yard arms furling one of the squaresails, I noticed lots of twinkling flashes in the water far below. During the upcoming night hours, thousands of squid swarmed around the boat, unmatched by anything the captain had seen since 1996. It was likely the ship's lighting that attracted them. Perhaps they thought it was moonlight. One of the crew members (Beckett) jumped in the water with his snorkeling gear and my dad's little waterproof camera and took AMAZING photos of the squid! 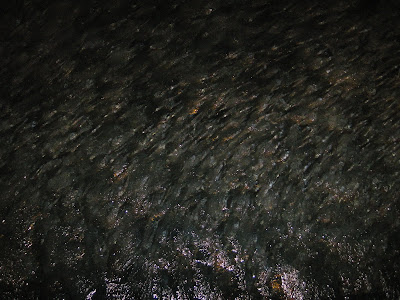 Squid as Observed from the Deck - by Dave Such 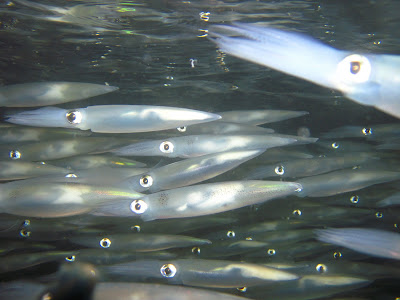 Over the next three days, we continued sailing around the Channel Islands learning the ropes and getting proficient at setting the sails. We jumped into the sea every morning before breakfast, washed dishes, scrubbed decks, snorkeled, kayaked, went ashore at Toyon Bay, got doused by big waves crashing over the bow, felt sorry for our shipmates who got seasick, studied marine biology (plankton, bioluminescence, sea mammals, bio-accumulation of toxins, etc.), saw a Gray Whale, rode the bowsprit while dolphins swam beneath us, and learned the value of hard work, teamwork, and cooperation. 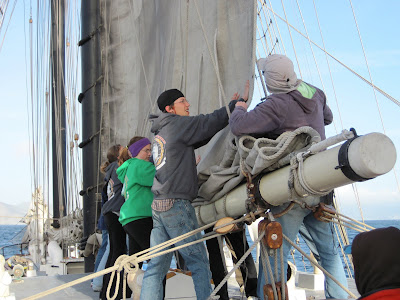 Furling the Sails (Marcel in front) - by David Such 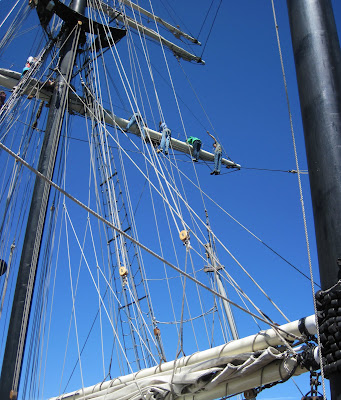 Unfurling the Squaresail (Marcel on far right)
by David Such 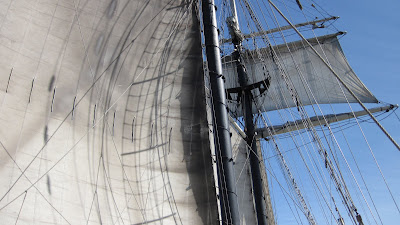 Sails - by David Such 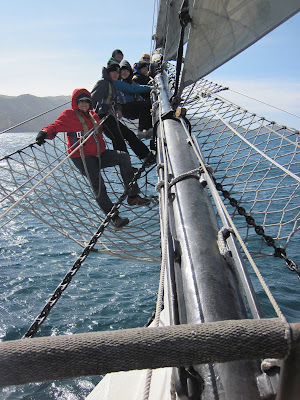 Riding the Bowsprit - by David Such 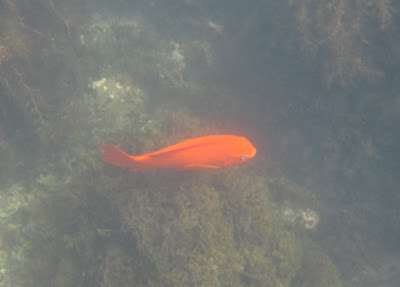 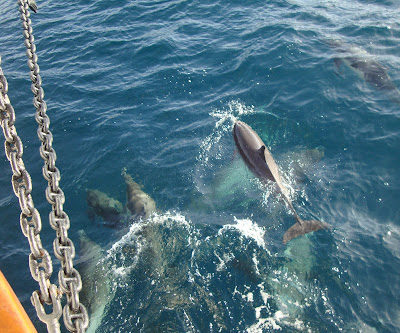 Common Dolphins Swimming Alongside the Tole Mour
by Maia Lang

On our last day, we Sea Lyons struck and set the sails for our voyage back to Long Beach Harbor in our record time of 19 minutes unassisted by the Tole Mour Crew. It was an amazing trip full of incredible experiences! Thanks to Patch for all the time and energy he put into making this trip happen and to Captain Snark and the rest of the Tole Mour crew for a great adventure!!! 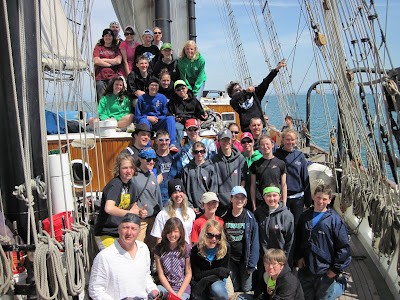 Great post Joel! Makes me want to go back again, and again and again!