With the blizzard that came through over the weekend, we've seen some cool storm refugees down along our creek.  A male Red-naped Sapsucker definitely takes the top of the list as a highlight, being a new "yard bird," a species we have never before seen on our property.  Joel found it on Friday, during the "rain/sleet" stage of the storm, in a small Ponderosa Pine just upstream from our house.  He also found three male Ruby-crowned Kinglets and a House Wren.
Our parents kept us very busy with an indoor project on Sunday when most everyone else was out birding and getting some nice species counts (up to 90)!  We escaped our tasks for a while when our neighbor called to tell us that she was looking at a finch, which she thought might be a Rosy Finch.  She sent the below photo for our opinion and that prompted us to walk over to her house hoping to see this single Brown-capped Rosy-Finch.  It never reappeared, but we watched her usual common feeder birds.  In December of 2006 Laurie had a whole flock descend on her feeders and stay for two days.  They were great fun to watch and we've included some of the old photos and video footage along with a photo of this years single visitor. 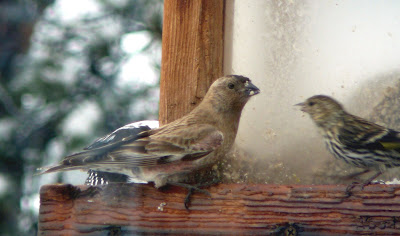 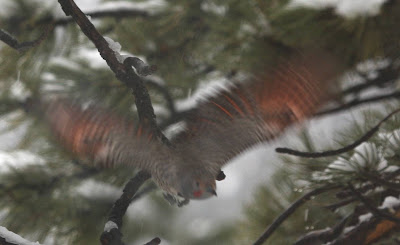 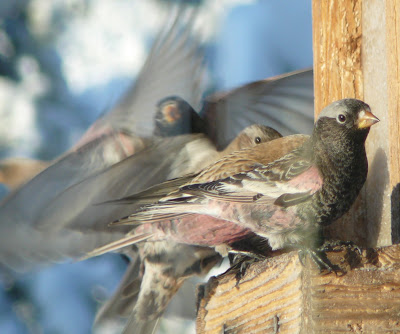 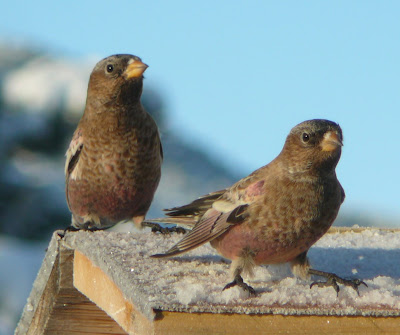 Coolness. Good pics. That storm in 06 really brought out the rosies. I'll keep looking for the rosies and will give you a ring next time I see them.
Maybe you guys can come up with some incredible bird food that would keep them there long enough for you to walk over and see them.
What do rosies like best to eat?

Oh my god...look at those rosy finches!!!! How many birds would you say that is?