This past June, my friend, Levi, and I (Joel) had the opportunity to attend the legendary Hog Island Coastal Bird Studies camp in Maine. Typically, traveling by air from Colorado to the East coast can be quite tricky in terms of cost and logistics. In order to get a relatively good deal on fares, as well as to guarantee that we'd make it to the camp on time, we flew into Maine two days early. Luckily, our all-day flight sequences didn't have any major hiccups. Staying in a hotel in South Portland, we had some solo time to explore the Portland area. Despite finding the hotel area to be the most bird rich place on this leg of our trip, we still made a few interesting trips away utilizing bus and cab transportation. The definite highlight was a visit to Scarborough Marsh. 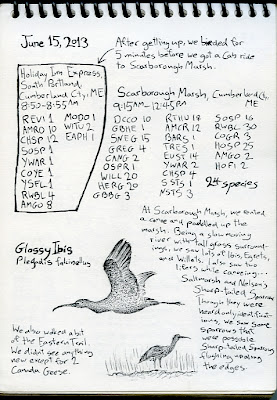 Traveling by canoe, Levi and I snaked our way up a river surrounded by tall coarse grasses. The river, not a typical one, runs through the largest saltwater marsh in Maine . . . Scarborough Marsh. Comprised of Spartina grasses (cord grass and salt hay), Nelson's and Saltmarsh Sparrows were the only passerines detected in the marsh while canoeing. From the black and white flash of a Willet's wing to a Double-crested Cormorant emerging from the murky nutrient rich water, we anticipated something new around every bend. 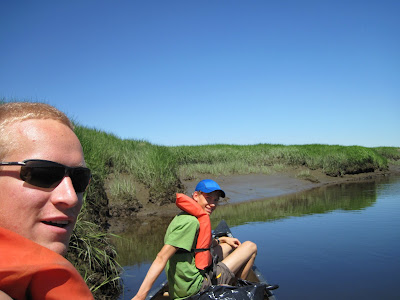 Levi and I aboard the canoe at Scarborough Marsh 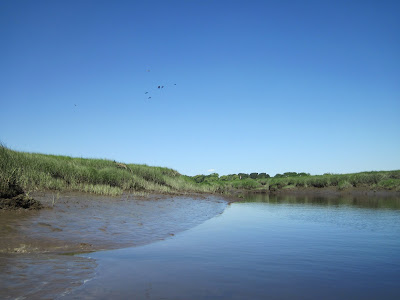 While paddling up this river, small clusters of Glossy Ibis frequently wheeled overhead. 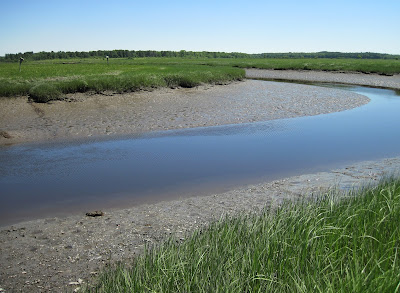 Being a tidal marsh, the depth of the water rapidly changed during our time on the river.

After a couple hours of paddling, we arrived back at the Scarborough Marsh Audubon Center where we had rented the canoe. Not entirely finished with the Scarborough area, we walked a quarter mile down the road to the Eastern Trail, a wide gravel pedestrian and bike path that also traverses Scarborough Marsh. With Song Sparrows singing in almost every tree, Snowy Egrets and other wading birds hunting along the mud banks, and numerous gulls swirling about, the bird life was drastically denser than on our canoeing excursion. Unfortunately, hunger and diminishing snack supplies turned us around a short distance down the trail. 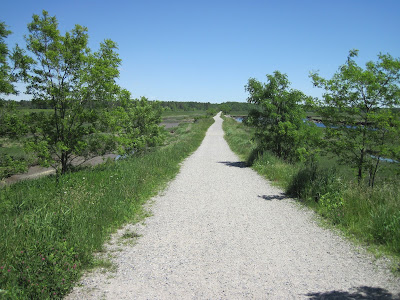 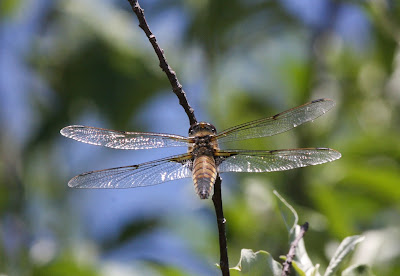 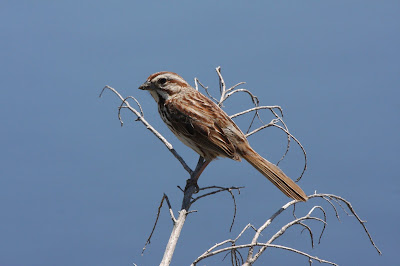 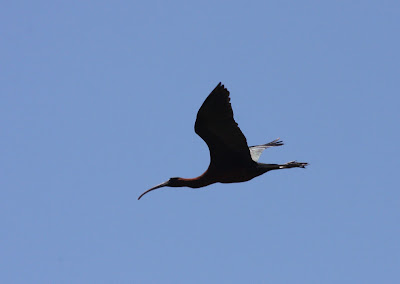 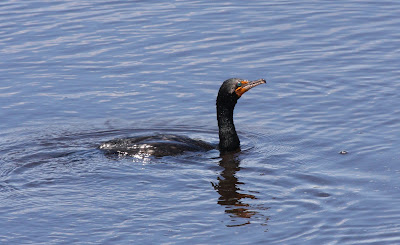 To close out our first complete day in Maine, we took the bus to the Old Port in downtown Portland. Chocked full of redundant gift shops, this historic district is known for its 19th century architecture and fishing piers. While we strolled the cobbled streets, Chimney Swifts swirled above the old brick buildings. Eventually, we found our way out to a public pier. Fringed with reckless casting fishermen, we managed to get our eyes on a low flying Black-crowned Night-Heron just before it disappeared behind another pier. 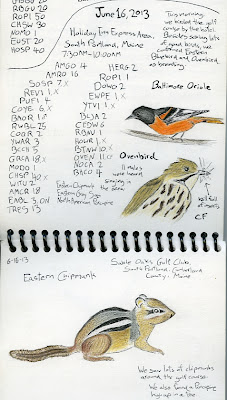 With trails winding through and around it, we decided to spend our last morning before camp exploring the golf course near the hotel. Over rolling hills, asphalt paths covered the massive golf course in numerous loops. Edged with towering trees, the Sable Oaks Golf Club had great wildlife habitat including cattail ponds, swamps, and thickets. 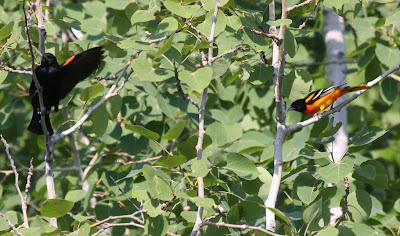 Red-winged Blackbird and Baltimore Oriole outside the hotel. 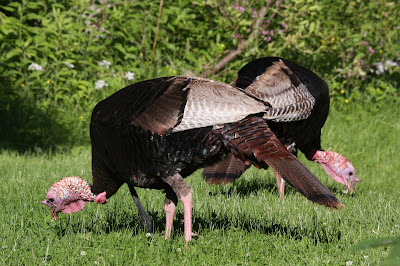 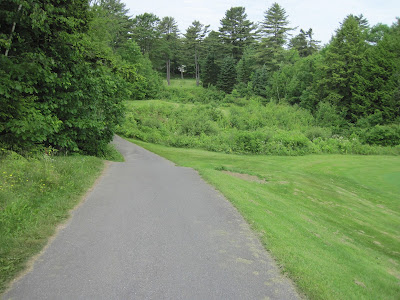 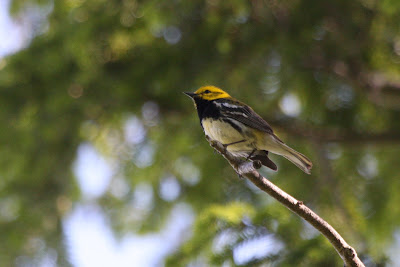 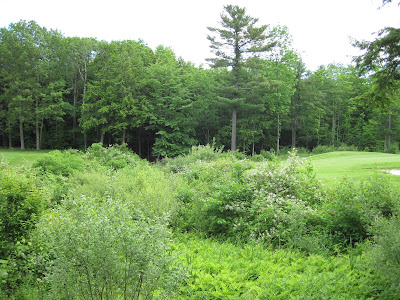 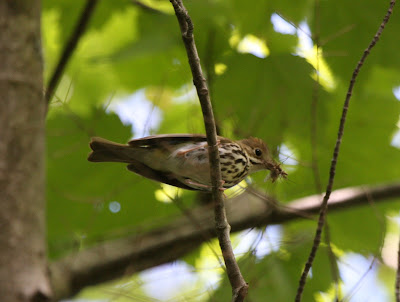 Ovenbird with a Mouthful 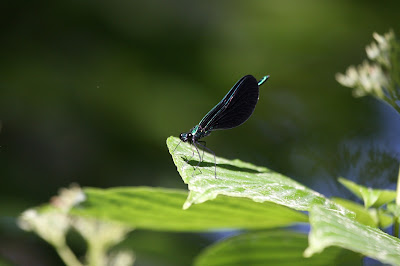 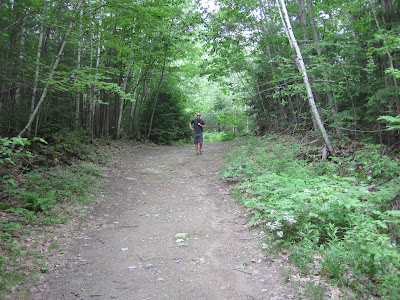 Dirt trails through densely wooded areas were abundant on the perimeter of the golf course. 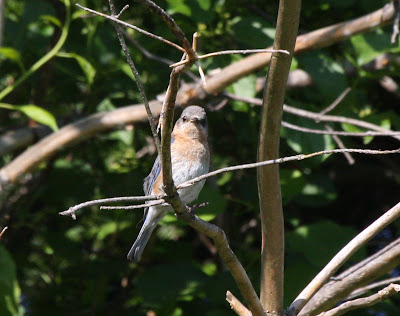 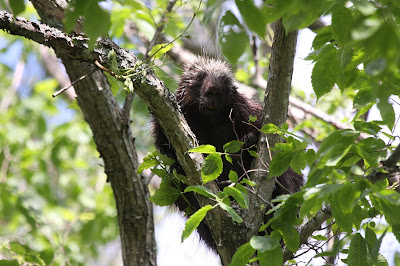