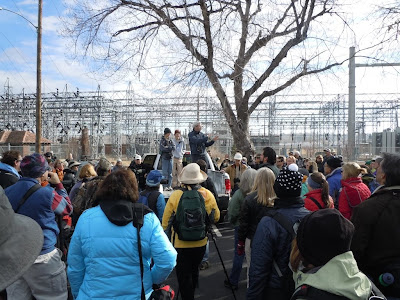 Yesterday, January 8th, was the annual Xcel Energy/American Birding Association/Colorado Field Ornithologists/Denver Field Ornithologists/Boulder Bird Club/Nikon Sports Optics Valmont Power Plant “Gullapalooza” field trip. A major seasonal highpoint for the Front Range birding community, this trip – one of the largest regularly organized events in the country – draws massive numbers of birders from up and down the Front Range, from Fort Collins to Colorado Springs. For the 2010 venue, an incredible total of 121 participants signed up, a total which few thought would be broken. But, this year an unbelievable 227 signed in, with many more slipping through without being counted. What makes this trip so popular? Many factors come into play here, some of which are listed below.
1 – Accessibility
The Valmont Power Plant in Boulder and its adjacent cooling reservoirs are generally closed to the public, only opening once or twice a year for these heavily attended field trips. At all other times, the closest viewing is a half a mile away at nearby Legion Park or Red Hill, where, with the help of super powered optics, one can just make out the vast numbers of distant ducks and roosting gulls on the two closest reservoirs, Hillcrest and Valmont. The third reservoir, Leggitt, however, is too far away for any possible viewing. So, when a chance arises to get “up close and personal,” people understandably jump at the opportunity. 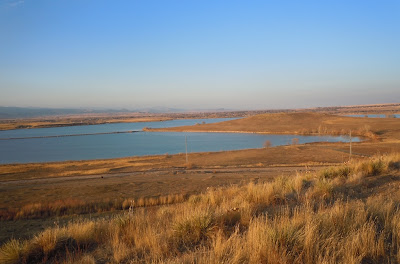 The Usual View from Legion Park
2 – The Birds
Merely by themselves, the Valmont reservoirs are nothing special . . . just some other large, deep reservoirs, but with an industrial landscape on half its shoreline. If any other lakes in the area are free of ice, you’re likely to have just as good of luck birding there. But add freezing cold weather, and Valmont instantly becomes a premier birding location in Boulder County. Because of warm cooling water being discharged from the coal-fired electrical production plant, the reservoirs remain open all winter, no matter how low the mercury drops. So, when all other potential lakes and reservoirs in the area freeze over, all of the ducks, geese, grebes, gulls, and other water-needy birds converge on the Valmont reservoirs, creating an incredible birding environment.
The Evening Fly-In 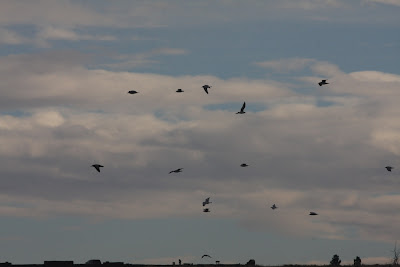 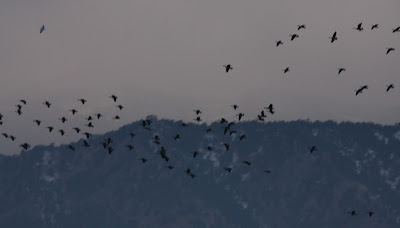 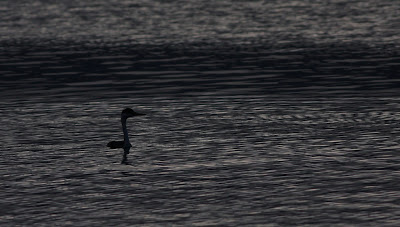 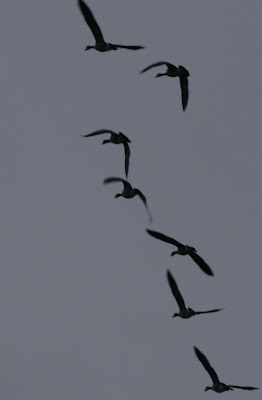 With so many people converged on a single spot, this has become not just a birding trip, but also a massive social event. I can’t speak for everybody, but one of the main pulls to this event for me isn’t just the birds, but also the opportunity to meet, greet, and bird with some of the best birders in the state, or country, for that matter. Among the excellent pool of trip leaders for this event are Ted Floyd, editor of Birding; Jeff Gordon, President of the American Birding Association; Bill Schmoker, one of the countries best known bird photographers; Nathan Pieplow, a bird sound expert and editor of Colorado Birds; Bill Kaempfer, an excellent Boulder County birder; and Mike Frieberg, an excellent birder and Nikon Birding Market Specialist. Joel and I were even invited to co-lead alongside Ted Floyd, which is a great honor and provides us with valuable experience. And, lots of other good birders show up and happily share their scopes and expertise with the crowd. 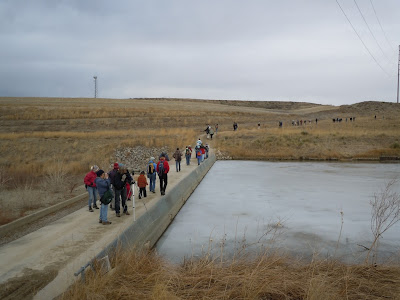 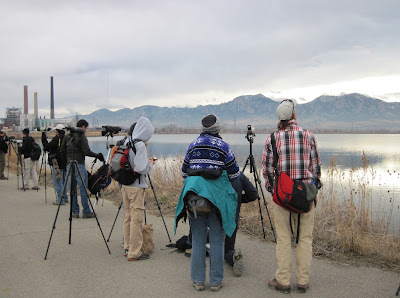 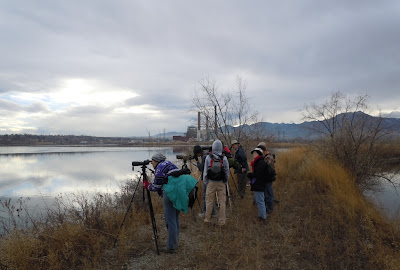 4 – Trip Timing
Unlike nearly every other birding type field trip, the Valmont trip starts at noon! Because it is really cold in the morning, and because the regular waterfowl stay just as active in the afternoon as they are in the morning, and because the roosting gulls don’t come in until just before dark, it makes far more sense to start this bird walk at noon instead of the standard early morning departure. And, it seems, this time also appeals to a far greater number of people than just the die-hard bird freaks.
So there you have it, if you ever want to create a super-massive field trip to rival all else, you know to largely restrict the site to birders except for one or two days a year; make sure that there are a lot of birds; make sure that you spread the word via the news media and internet; and start your trip at noon.
Though the conditions weren't completely perfect today - some of the nearby reservoirs had shucked their ice in the "heat wave" that started a couple of days before the walk - we still had good numbers of ducks, and a good variety of gulls (highlights being a Mew, a few Californias, and a couple of Thayer's and Lesser Black-backs). There was also a Tundra Swan that has made Valmont home for the past few weeks. 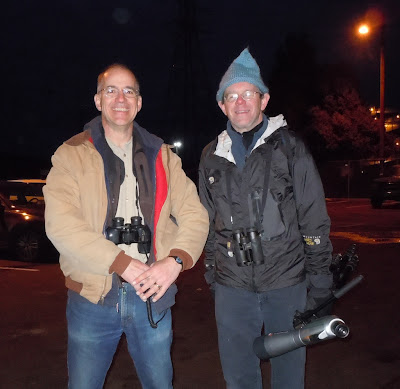 Love this blog post...we linked to you from our Celebrate Urban Birds Facebook page

What a great opportunity -- birds and people! Great blog. Thanks! We'll link to you from BirdNote.org.