While working through my photos from this year's trip to Texas, I (Marcel) came across this photo of a grebe.  At the time the photograph was taken, there were both Least and Pied-billed Grebes in the pond, and I had assumed this was a Least.  A few days ago, I looked at this photograph more closely and realized that something was amiss!  I wondered if it could be a Least x Pied-billed Grebe hybrid.  However, Pyle says that this type of hybrid has never been recorded before.  I sent it to Tony Leukering and he also suspects that this is what a hybrid of that cross would look like.  Note the huge bill and yellow eye.  The only other option I can think of is a Least Grebe with a deformed bill. 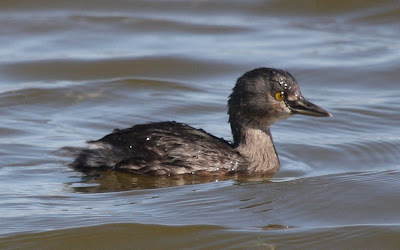 Odd-looking Grebe
Estero Llano Grande State Park, Weslaco, Hidalgo County
February 23, 2009  - by Marcel Such
If you have an opinion on the identity of this bird, please leave a comment.
Posted by The Such Boys at 5:46 PM

In my opinion, it is a hybrid. Great find; this is where photos are the best tool.

Great photos, you guys! And nice drawings too! I just found your blog...no surprise that a lot of the birds here in S Dakota are also in Colorado. Very nice blog.

I think it's a duck that got into some oil. But then, I can't tell the difference between a magpie and a stellar's jay, so you might not want to take my opinion into account.

I would say that it is a slightly melanistic Least Grebe. Your right, if it were a Pied-billed Grebe, then the beak would not seem right.

I think that the coloration is right for a normal LEGR, as it would be in its paler non-breeding, or basic, plumage.

How about a Least Grebe?

How about a least grebe?